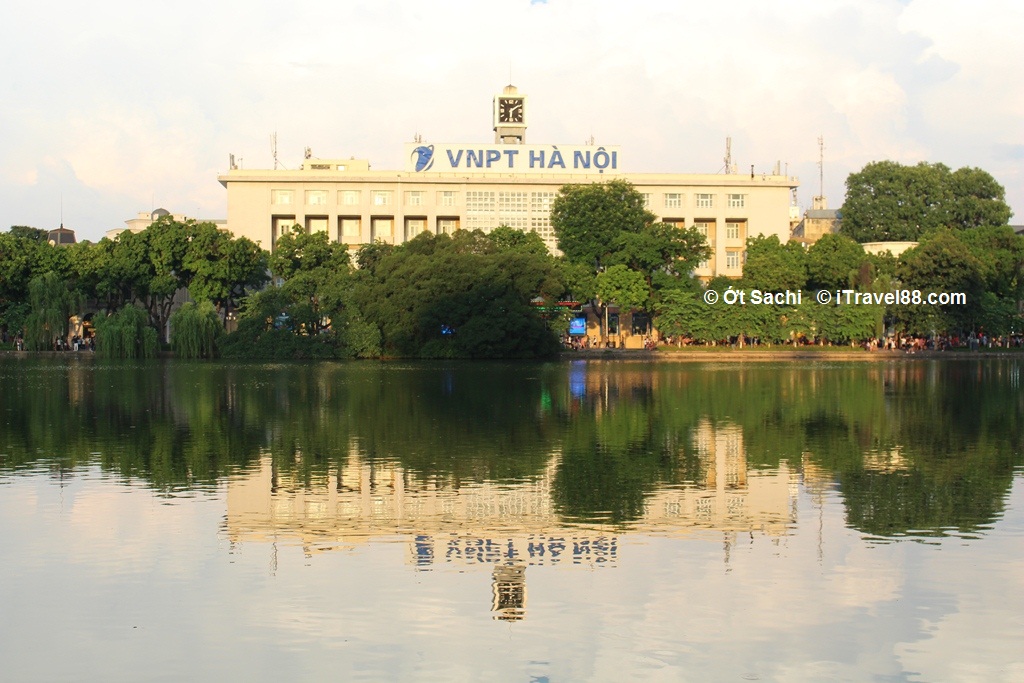 Ha Noi is capital of Vietnam with more than 1.000 years of civilization. There are many attractive places to explore in this city. Thus, you may not know where to go, what to do in Ha Noi for the first time. Today, iTravel88 will introduce you top 10 best places to visit in Ha Noi!

1.1 Legend of the name Hoan Kiem

The first place that every foreigner must visit is Hoan Kiem lake (Sword lake) – the heart of Ha Noi city. It locates in centre of Hoan Kiem district. There is an interseting legend referring the name of the lake.

In early 15th Century, Ming army from China invaded and established sovereignty over Vietnam. Thus, Vietnamese had to fight against China in order to gain liberation. One of talented leader was Le Loi from Thanh Hoa province. However, his army was very weak compared to Ming’s.

The legend told that Dragon King living underwater palace decided to help him by sending him a magic sword. With the help of Dragon King, Le Loi led Vietnamese defeated Ming to gain freedom for Vietnamese.

Later on Le Loi became the the first King of Le dynasty. One day, when he was boating on Luc Thuy lake, a giant turtle suddenly appeared according to Dragon King’s orders to take the sword from him. After this event, Le Thai To renamed the lake to “Sword lake” or Hoan Kiem lake as we often call.

Besides enjoying the beauty and fresh of Hoan Kiem lake, there are many thing to see around here. It can be listed here such as:

You may surprise that inside such a modern and dynamic city as Ha Noi, there is an antique quarter name Ha Noi’s old quarter. The quarter started since King Ly Thai To moved capital from Hoa Lu to Thang Long in 1010. Therefore, the streets also had more than 1000 years old until now.

In the past, people often came to Thang Long for their business from surrounding areas. Then they made their own street near to citadel for conveniences. When the streets were developed, they used guild name to apply for the streets.

When visit old quarter, you’ll have chance to enjoy special local food namely pho, bun cha, mixed fruits,… And don’t forget to visit Ta Hien street or pub street. This is the most favourite street of foreigners in Old quarter!

St. Joseph’s Cathedral is the oldest church in Ha Noi. It locates in Nha Tho Street, where is 500m from Hoan Kiem lake. The church was started to build in 1886 with the architectural style of Notre Dame de Paris. This is one of the first construction under French colonial government in Indochina.

These days, it is one of top 10 best places to visit in Ha Noi, especially for christians. As you come here, don’t forget to enjoy famous lemon tea in tea shops near to the Cathedral.

Ha Noi opera house is the most famous opera house in Ha Noi. It was an other construction under French colonists when Viet Nam was still a part of French indochina. The opera was modeled on the Palais Garnier – a opera house in Paris. It has typical yellow color that makes it outstanding under the sun light.

Nowadays, it’s place to hold some concert or big music event. Although it’s more than 100 years old, the structure’s still well-preserved. The opera house also a must check-in point in Ha Noi.

Long Bien was the first bridge across the Red river. It was constructed by French contractor from 1899-1902. At that time, it took pride in being the longest bridge in Asia. Before 1954, it was called Paul Doumer – General of French Indochina who had the bridge bulit to connect City center and suburban areas.

During the war, it was heavily bombarded by US army due to its important position. This was reason why the bridge were partly damaged. Luckily, some parts of the original structure remain intact. Nowaday it’s a preference place of youth people. Besides taking railway photos, the bridge is the best place to see sunset in Ha Noi

Vietnam museum of Ethnology is the most visited museum in Ha Noi. It locates in Nguyen Van Huyen Street, Cau Giay district. If you want to have an overview of 54 ethnics in Vietnam, this place can not be ignored.

There are 3 main parts include: the bronze-drum building where displays things related to some ethnic’s life namely Viet, Muong, Thai,…. The second building is to show life in some Southeast Asia countries.

The most amazing part is open-air exhibition where has houses of diverse ethnic groups in Viet Nam such as Viet, Hmong, Yao, and so on. All the houses were designed and built by craftsmen from these ethnics. So it can say that the museum is a small scale of Viet Nam.

Ho Chi Minh president is our national hero. He’s not only admirable in Vietnam but also worldwide. As you go to Ha Noi, don’t forget to visit Ho Chi Minh complex.

Ho Chi Minh mausoleum is place to keep Ho Chi Minh president’s body. It was started to build from 1973 to 1975 with the help of So Viet Union. The mausoleum was made off marble and granite. Ho Chi Minh’s body is being stored in the second floor. His body is lying as if he’s just sleeping.

To enter the mausoleum, you have to queue and pass security check. Another notice is that it’s quite crowded, so you should come here early if don’t want to wait.

Ho Chi Minh museum is located near to the mausoleum. It was built in shape of lotus flower – Vietnamese national flower and also the name of Ho Chi Minh hometown (Kim Lien village). There is a huge bronze statue of Ho Chi Minh with a friendly wave in entry hall. Thus, you’ll find cosy when you arrive here.

It can say that the museum is a summary of Ho Chi Minh’s life and his revolutionary career. By visiting here, you will understand more about his contribution to our country. Moreover, you may know reasons why he’s famous all over the world. Please come and find out your own answer!

7.3 One pillar pagoda (places to visit in Ha Noi)

One pillar pagoda was built in 1049 under Ly dysnasty when buddhism was our national religion. There was an exciting legend related to construction of the pagoda.

The myth told that King Ly Thanh Tong hadn’t have a son to succeed his throne. Once night he dreamt about Goddness. Thank to this fairy dream, he was given a boy later. In order to memorize Goddness, he had this pagoda built in shape of a lotus growing in a pond.

Today, the pogoda is one of Ha Noi’s symbols. Let’s come here to explore this uniqe pagoda yourself!

Nowaday, it’s an ideal place for resident to do exercise. Other fascinating activities are flag raising and lowering ceremonies occurring everyday. The time I mentioned above, pls NOTICE!

The last point in the complex is Ho Chi Minh’s house. We all know that he was a simple people. Therefore he choose a normal house to live instead of large building. Its architecture simulate the house ethnic minority. It shown that he always thought about Vietnamese people. This residence was constructed for him to live and work until he passed away.

An interesting thing here is fishes living in the pond in front of his house. When you clap your hand, the fishes will appear. Please come and experience this amazing activity yourself!

Tran Quoc pagoda is sited on a small island in West Lake. It takes only 1 km to go there from Ho Chi Minh complex. In the beginning under the reign of Emperor Ly Nam De (544-548), its name was Khai Quoc which meant National Founding.

That is reason why it’s one of the most important temple in Ha Noi. If you want to pray for health, safety or just want to find peaceful in mind, Tran Quoc pagoda is place for you!

The temple of literature was built in 1070 under Ly dynasty in order to honor Confucius. 6 years later, King Ly Nhan Tong constructed it Quoc Tu Giam as the first university of Viet Nam. The temple has 5 parts corresponding to its own historical importance:

Nowaday, Temple of literature is used to hold honor ceremony for entry and graduation valedictorians. It’s also a place where students take yearbook photos before graduation. In case you haven’t had a yearbook yet, let’s come here to make your own in Vietnamese style!

Maison Centrale was built by French in 1896 when Vietnam was a part of French indochina. Before constructing the prison, this area belonged to Hoa Lo village. Thus, Vietnamese people often call it Hoa Lo prison.

It was used for Vietnamese political prisoners. Then it’s place to prison American soliders arrested by North Vietnam during Vietnam war. In early 1990s, almost the jail was demolished to make room for Ha Noi towers. Fortunately, the entry gate was kept as a museum until now. Hence, you want to have a look back on the past, please come here to explore.

This is Top 10 best places to visit in Ha Noi collected by iTravel88. Please let us know your impresion about these places in the comment box or via fanpage. If you feel the post useful, please like and share this post to spread this useful information. And don’t forget to come back my blog to see amazing Vietnam destinations.

If you find this post interesting, please support me to maintain Blog’s operation by giving me a coffee! Thank you!

Top view in Blog: My road to become a travel blogger form a low tech girl

Top 10 amazing things to do in Quang Binh! 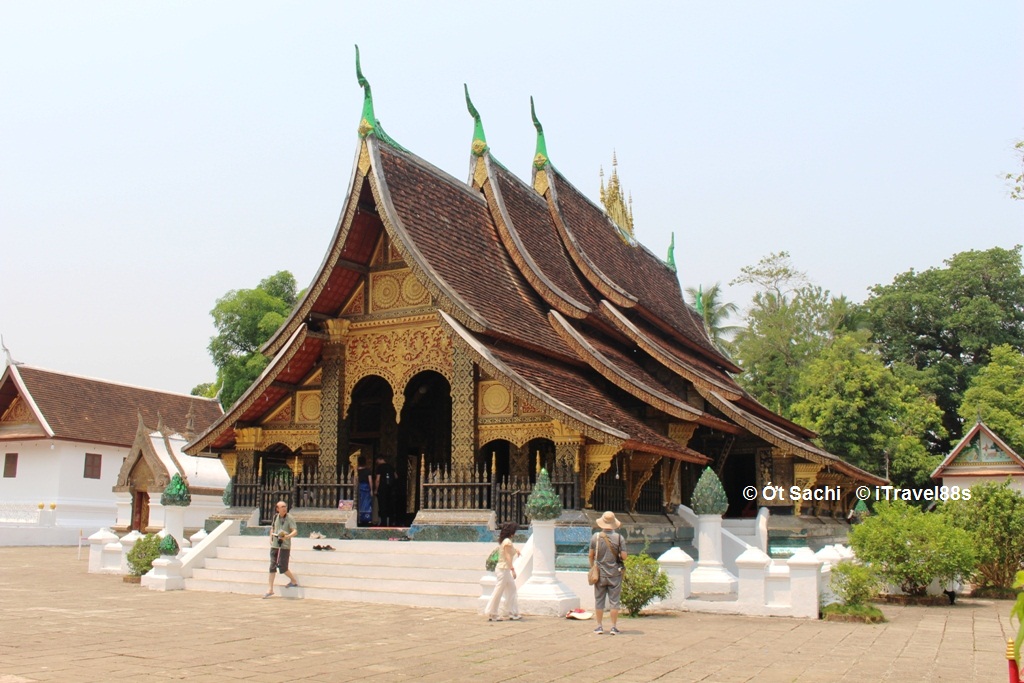